Averaging Rules Can Increase Profits
A short spike in volatility or a one or two bar downturn caused by a single sale of a large amount of stock can lead to whipsaw trades and lost profits. A simple averaging rule can prevent the excessive trades and increase your profits.

Start with a Simple Rule 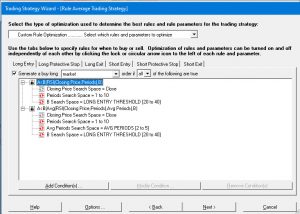 However we wanted the optimizer to select the best number of periods to increase profits.

We also wanted a balanced system. We set the number of average periods in both the Long Entry and Short Entry rules to optimize to the same number of periods using the Trader’s linking capability. Click here to learn how to link parameters.

We included our original RSI rule to insure that the entry condition was still true when the trading signal is generated.

We locked both rules to prevent the optimizer from throwing out either rule.

Check Out the Results 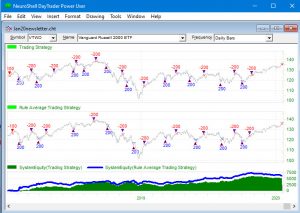 The simple RSI Trading Strategy produced $4973 in equity compared to $6216 for the Rule Average Trading Strategy. Since more volatility appears in intraday charts, you might see more of an improvement when you use averaging rules.